i have almost finished the porch...from the pier, you can't even tell that there are still brown wood spots showing:) this is a big project...i organized all my bill stuff yesterday...i have checks and things from march of 09 that haven't gone through...that could be the problem...enjoying the cooler weather today, perfect for painting.

The sweetest thing...yesterday Rileyn had the hiccups and i was laughing and she said mom, why is it funny, you said hiccups were good bc that meant i was growing... i told her i wanted her to stay little forever not to grow up and she said but mom, i want to be a mommy! love it!

Bryson is an amazing artist...he's drawn some super heroes that i'll post after our Hot Springs trip.

Doing a Bible study over book of ruth...should be great...is so far.
Posted by The Schubey Shack at 7:50 AM 3 comments:

I am asking for your prayer requests...In our family, I am in charge of the financial records, the book-keeping and bill paying...Well, long story short, in our early years, I was very diligent and almost anal about it...if my book and the banks statements were off by even one cent, I would find the mistake. Now not so much. I hate doing the bills, I hate keeping the books and I have let things go that I shouldn't have. But now, the bank and my books don't match up at all. We are not struggling financially, I just haven't been very good at keeping up with things...so my request is that you will pray for me for patience and the desire to keep things in order again and that the mistakes will be found. I get very frustrated with it all and instead of searching for that mistake I just put it away so that I don't have to think about it. Thanks in advance!
Posted by The Schubey Shack at 4:32 AM 4 comments:

Last Wednesday night after church we stopped off at the dollar store so i could run in and get some dishwasher soap (a must need) and when i came back to the car my whole family was laughing...i asked what was up and dave told me that Keldyn had said "Hey that man looks like a lady...no wait...it is a lady!" there was an employee that had masculine facial features but long hair...it was too funny...

Rielyn has started using big words...words that she shouldn't know...like frustrated, random and diva! she tells me she is frustrated with something (i give credit to Piny Dinky Doo for that one). she asked me to get her a drink the other day and i said just grab a cup and get some water to which she replied "mom, i don't want to use just some random cup, can you get me one from the cabinet" and then sunday she asked me if i could strap her shoes bc she was too busy being diva-ish....what in the world are we going to do with her!!!

we have been busy remodeling one of our downstairs bedrooms and making a hallway to give direct access to our future game room and i have been busy staining our patio....it looks great, just time consuming, still not finished yet! hope you have a blessed week!
Posted by The Schubey Shack at 5:07 AM 2 comments: 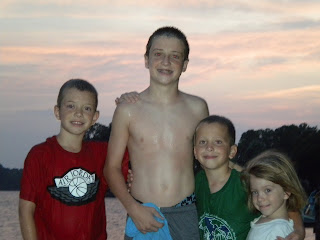 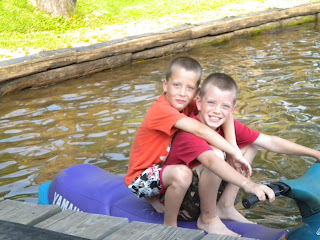 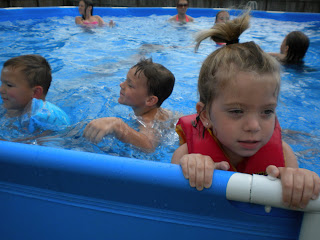 Actually, she does exist....I know, I know I have been MIA since summer began but we have been quite busy...After Cole went back to Georgia, David went to Burnett to build a barn with Keith, he was gone from Thursday to Monday so it was just me and the kiddos....Keldyn started running fever Thursday, nothing else except tired and fever...high fever, a couple days later, Bryson did the same thing. It lasted with both of them about 4 days....we did not go to the doctor (Worst mom award again)but they are both doing great now...Keldyn is getting ready to go to Oklahoma with Lala and Pappy for his summer trip (remember last year Bryson went to Georgia with them) he will be gone until late Monday. We have cleaned out flower beds, redesigned flower beds and now all we have to do is actually put the flowers in them... I have power washed decks in preparation of staining and sealer, we have edged up our yard next to the road in preparation of putting in a small wall/curb and we have finished the inside of shed for water activity storage (life jackets, floaties, etc). Tonight, my man is taking me out on a date (Hunan's) but of course we had to stop off at the gym for a little summer league bball....David is playing in a church league softball thingy in Longview on Tuesday nights, so that's where we will be for the next several weeks. He had a great time, even though they lost. We are planning on heading north to Hot Springs for a few days next weekend. And summer is almost over...seeing that vball two a days start on August 2, time runs out quickly...and I still have English type things to do...I need one good rainy day so I can stay inside and work... have a blessed weekend...God is sooo good!
Posted by The Schubey Shack at 4:02 PM 3 comments:

Ok...so we were swimming in the lake Sunday afternoon and all off a sudden Keldyn yells "Ouch, something just bit me!" I said well get out of the water...he just stood there...I'm thinking snake. He says no it was a turtle. I check and sure enough he has two small, microscopic bit marks on his NIPPLE that produce a small amount of blood....i check the water, no snakes...so it must have been a turtle. The more the story was told we are now thinking it was a brim. a small fish known for nibbling. Later that evening, we went out in Pappy's pontoon boat and the boys jumped in...all but Keldyn....i could see that he was hesitant so i asked him what was wrong and he said "do brim bite any other parts?????" That baby was worried about his manhood! I almost fell out of the boat laughing so hard. I know its not funny, but it kind of is!! Always KELDYN!

Ran in the 5K with Tiff and believe i am now addicted to these crazy races. I had a blast...it helps that i won a medal but i really do just enjoy it. I ran it in 25:44, got 49th out of all the runners; 8th out of all the female runners and 2nd in my age group....i was pretty pumped. Tiff did great as well and we had a blast doing it.

Good lesson at Sunday School this week... came to realize that sometimes God doesn't want you to move mountains but to rely on him to get over them, through them or around them. and that our hard times make us stronger in our relationship with him and in our faith. I'll have more to post on that later!

We've had our 4th cousin from Georgia in this week, Cole, and have had a blast getting to know him. He is an amazing basketball player! we keep trying to talk him into leaving his parents and moving in with us!HEHE! the crazy thing is that he looks like he could be one of ours...he and the boys favor each other...I'll post pics after i get my laptop back from the school!
Posted by The Schubey Shack at 3:43 PM 2 comments:

My kiddos swam yesterday for 8 hours...i put sunscreen on them 1 time....they are sunburned and i am officially the worst mom ever. :( It was so sad, they were hurting so bad last night. we've applied multiple layers of aloe vera gel, but i still feel terrible. We had a productive weekend. David got back early Saturday so we were able to get some of our own chores done. I cleaned out all of our flower beds and am getting them ready for new plants. David and I built a fence Sunday. A small one on the side of our house to cover up trailers and lawnmowers. It took a little less than 3 hours so we were pumped about that. Yesterday, we did more yard work and the kids swam...they had free hot dogs and such through the volunteer fire department so we did that for lunch...small towns....love em! Sarah and Charlie came by for a little while with their kids. Peyton despeately wanted to go on the pontoon boat but Pappy has the keys in Dallas (he didn't want Lala taking it out by herself). Tiff and her kids also came over and swam. It was a productive, yet relaxing memorial day! Four days of school left ....Whew Who!
Posted by The Schubey Shack at 9:29 AM 4 comments: